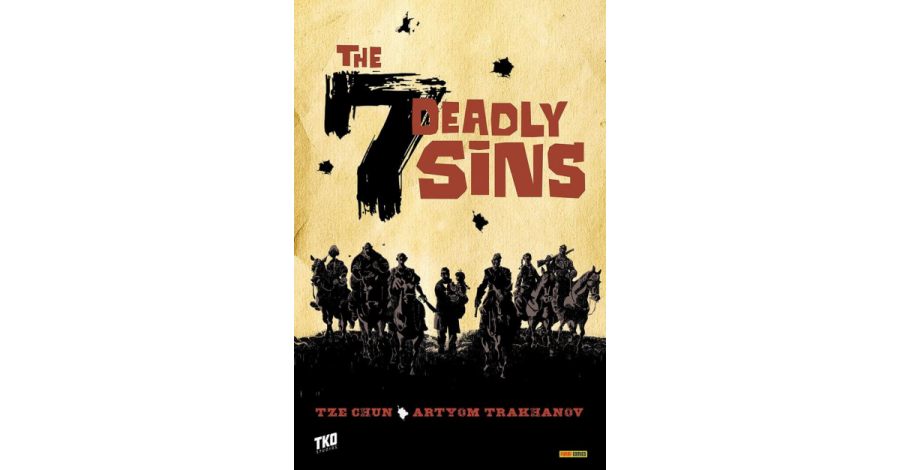 The 7 Deadly Sins by Tze Chun is a western graphic novel set in 1857, not to be confused with the anime with the same name. It is about a group of six convicts that have one sin from the seven deadly sins and their financier that release them from death row. The story mirrors the Magnificent seven and the Seven Samurai. This graphic novel is about redemption. It is multiracial cast with diverse backgrounds. The story was just okay, but some character motivations just did not make sense. I will say that I did love the colors used and every wide panel, but the close up or medium panels were sometimes confusing, having me flip back to tell just what action happened. The book is very bloody and gory. This book had the worst drawings of noses that were so bad they were almost distracting. I loved only two characters stories and background far more than any others one was the burned pregnant slave girl and the other was the priest assistant and financier of the mission to return his daughter to the murderous chief. The Seven Deadly Sins collects issues 1 – 6 for TKO comics.

The Plot: A chief is on a rampage killing families in 1857 Texas. The Texas Rangers want to stop him but he can avoid capture, but a reverend’s assistant hold the key in his daughter, that was stolen on a raid 9 years ago. He uses the reverend’s number one enemy when he releases him with 5 other death row inmates. He offers them money, fresh start, and some redemption in doing a good deed. They are hunted by the priest who wants the money that his assistant stole, which he was stealing from the church.

What I Liked: the color art was the best thing it was really beautiful and captured the desert landscape. The storyline involving the pregnant and burnt slave was the best, she should have been lead because she was by far the most interesting character with a heart breaking background. I like the reverends assistant storyline and the relationship with his daughter. The scene with the underground pond escape was really great. The scalping of the priest was brutal and creepy that he survived it.

What I Disliked: The character of the reverend and Daper’s motivations made no sense, and really hurt the story. It was a little hard to place the character to the seven deadly sins, I still have question marks over a few of them. The art of people and especially there noses, so distracting.

Recommendation: The 7 Deadly Sins was interesting in some parts, but not enough for me to recommend. The purchase price was cheap at 1.99 and was worth that price on kindle. I rated The 7 Deadly Sins 2 out of 5 stars. I might try one more TKO comic in Sara by Garth Ennis.