What I Liked: The humor is filled throughout this collection, the funniest moments are all around the phrase “I am Groot” There’s a great scene where alien children are around the fire asking rocket about his latest adventure, and says Groot tells it better, so we get a whole adventure where people, dates and even store front signs are all labeled “I am Groot.” Another scene where Groot is sick and tells Rocket Raccoon “I am Groot” where Rocket replies he’s not making sense. There are some great moments of humor involving art.

What I Disliked: The art work of the Guardians of the Galaxy was sooo dark, you can barely see some of the art. The Guardian of the Galaxy do a really bad job of introducing all the characters, it basically relies on you having seen the movies, which I have but there needed to be more the only one who gets an introduction was Cosmo the Russian dog that is telepathic and not introduced in the movies, (even though he does have a cameo in the Collector’s lair in the first Guardians of the Galaxy).

Recommendations: This is the scholastic version of Rocket Raccoon and Groot presented by Marvel. I was reading this for content in looking to give this book to my almost 7 year old nephew. This comic should be 6 and above for some minor prison violence. I think my nephew will love it as he is just getting into superheroes. I rated Rocket Raccoon and Groot graphic novel 3 out of 5 stars. The ultra dark Guardians of the Galaxy comics ruin what was looking like an excellent collection. 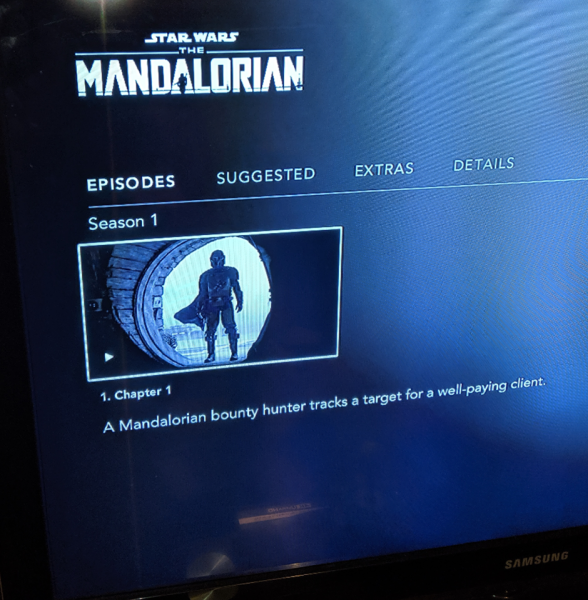 The Mandalorian episode 1 written by Jon Favreau and directed by Dave Filoni is off to a good start in the first live action show in the Star Wars universe it captures the look of Star Wars off the bat. The first episode took a minute to get into, I would have to say mainly to Horatio Sanz acting. I didn’t feel like he was part of the universe and more or less a guy in a costume. I was very satisfied with what happened to his character. The music was kind of odd at times, some times it was nailed, but I swear I heard parts of a Rocky like theme, I honestly don’t think it was implanted in my brain because I saw Carl Weathers, who was good. The cast without Horatio Sanz and other actors in the opening scene are good, really good. You will play where have I heard that voice from with voice talent from Nick Nolte and Taika Waititi. Other actors are Pedro Pascal as the Mandalorian, who does not take his helmet off and sounds more like a young Timothy Olyphant tan Pedro Pascal under the helmet, Werner Hertzog, Carl Weathers, Omid Abtahi and Brian Posehn. I’m a pretty big Star wars fans I’ve seen every movie watched most of the tv shows I love Rebels, read a decent amount of Star Wars books.

The Plot: (loose spoilers – I describe the first five minutes of the show) The world is torn after the defeat of the empire (The Mandalorian takes place after Return of the Jedi and before The Force Awakens. Bounty Hunting is in business, the mandalorian enters into a bar after a character was getting shaken down. When he walks in he’s immediately accosted he takes down the thugs and in brutal form (the camera cuts away as some one is sliced in half), The guy getting shakendown offers a reward as thanks, but the mandalorian looks him up and he has a bounty and is removed. That sets up the tone of the show. The mandalorian turns in his bounties then learns of a top secret loose on the details mission that he takes on a remote planet.

What I Liked: The visuals are stunning there’s a lot of really cool visuals that could be posters the final shot, and the walking out of the bar shot. The transitions in the show are the exact in a Star War . The acting is good except for Horatio Sanz, sorry. The story moves really well, the episode is only 35 minutes, which felt odd and went very fast. I liked that he doesn’t take the helmet off, we get to see his face as a boy through flashbacks. The special effects were really good for a tv show. There’s a creature that was in Jabba’s palace, that is featured here in a really memorable cameo scene, it is not the same creature but a cousin or brother maybe. Excellent action scenes. There’s good bits of humor throughout, Taika Waititi’s character gave me the biggest laughs. I love the characterization of the bounty hunter, very Clint Eastwood the spaghetti westerns. Theirs is a western no man’s land vibe.

What I Disliked: The music was at times weird, and did not fit. There’s only one episode up for now but no timeline listed of when new episodes come out, which I find frustrating. I liked Nick Nolte’s character but did not like the scene he was in, it felt like total filler. I reminded me of a bad episode of the Clone Wars. I took a second to get in to the universe.

Recommendations: I will recommend the series, it feels more like Rogue One the film than any other star wars film. The action and atmosphere is great. You doesn’t have to know anything about star wars too watch this show. I rated this episode 4 out of 5 stars. Personal note don’t worry my book review friends this is mainly a book review site, I just got Disney+ the three year deal and wanted to give my insight to the new show, for people that are star wars fans that are maybe on the fence.

Once Upon a Dream by Liz Braswell is a book from Disney’s Twisted Tales Series, where reader are given alternative versions of classic Disney stories by having What if questions. For Once Upon a Dream the what if scenario is, What if Sleeping Beauty never woke up? This scenario really hooked me, to get this book for my girlfriend, which Sleeping Beauty is her favorite story, and she let me read it after her. I was excited that it was actually Disney doing it. This is a YA book and it went over a lot of things I didn’t see the book tackling, like depression, arranged marriage, love at first site, female empowerment and self harm. This novel did throw me at first having a new background for Sleeping Beauty, but there is a reason, and I was satisfied with the reason, it does take a hundred pages to get there, though which I found was a bit too long. I manages to put some ideas about Maleficent, the movie, into the book about her character and explore some of those avenues of good and evil. The title come from the song that is sung in the movie Sleeping Beauty and covered in Maleficent by Lana Del Rey

The Plot: Princess Aurora has always lived in the castle, her parents wanted a boy so they could broker more land in a wedding. The fairies comes to the birth and offer gift of Beauty and song to Aurora and Merriweather offer her parents every wish they desire but they get Aurora when she turns 16. Maleficent prophecy is that when Aurora reaches 16 goodness will be restored on this wicked kingdom. We see Prince Phillip try to kiss Aurora and instead of wake her up he falls asleep thinking why didn’t I check to make sure she was dead. Aurora has been trapped in the castle since she was little Maleficent put thorns up all over the castle protecting them from an ongoing apocalypse going on on the outside, thanks to her parents greed. Maleficent punishes a man or drunkenness and saying he has been outside and survived. Aurora doesn’t believe this until she finds a feather for a bird that is not trapped with them in the castle, and the drunken man has not been seen again. She begins questioning the truth, and she’s horrified when she finds out what Maleficent has been hiding from her all along, is she a savior or something more.

What I Liked: The way things are revealed to the reader is really clever. There is one big twist that I really enjoyed. I liked that the book explored real life issues, and did it in a real way not a storybook way. Aurora is a strong character that does not need a man saving her. I loved the character of Hubert, Prince Phillips dad, and the reveals of that character. I liked the action the climax was almost too much but I did enjoy that the fight had real stakes and death at hand. I liked Maleficent’s overall plan for Aurora.

What I Disliked: This book could have been really good but it fell into cliches of people being demons, thank goodness not every person is, but when characters go it’s probably another demon, you have a problem, and it was too frequently. The chapters were way too long there sometimes good length then they will be fifty pages.

Recommendations: I have two teenage cousins that would absolutely love this book, as an adult I read 10 YA books a year, I like what was explored but the over all story had too many repetitions for me to whole heartedly recommend. I was torn by this review Liz Braswell has written two more in the Twisted Tale series and one is about Aladdin my favorite, with what if Aladdin had never found the lamp. I rated this book 3 out of 5 stars but I will give Liz Braswell another shot.