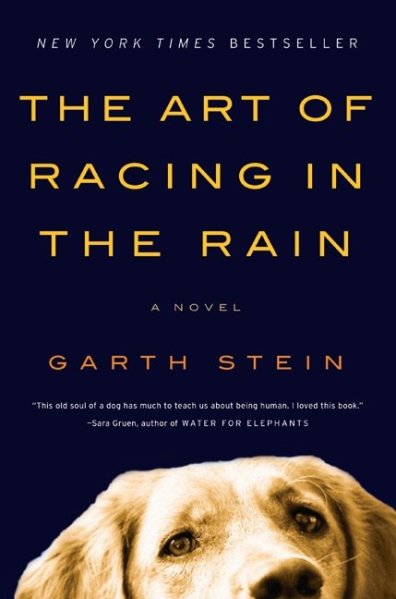 The Art of Racing in the Rain by Garth Stein is a story about life and all it’s ups and downs told from the perspective of Enzo the family dog. It is at times heartbreaking, romantic, humorous, and thought provoking. This is a super easy read that I was able to read in a day or so, the chapters are short for the majority. This book will give you all the feels, and will remind you of every time you talked to a pet and swore they knew what you were saying. The theme of racing and how it relates to life really work in the story. I have had The Art of Racing in the Rain on my TBR for quiet some time, and really glad the film came out to inspire me to read it. The film opened this week 8-9-2019 it Stars Kevin Costner, Milo Ventimiglia, and Amanda Seyfried. A part of me wants to see it, but after reading this book and watching the trailer, it seems like to different things. The movie looks like a romantic comedy with a dog and the book is so much more than that. I did read a review and they do get to the heart of life and it’s many ups and downs in the film, so I might see it after my girlfriend reads it.

The Plot: Enzo the dog has plenty of views on human life, like when you die as a dog you come back as a human is what Mongolian’s believed and so does Enzo. We meet EnZo when he is old and reflecting on his life with Denny. He tells how he’s was purchased on a farm by Denny. Denny is an amateur Race Car Driver trying to make it to the professional level. Enzo becomes his best friend a tells him exactly how to race and in one of the best scene puts Enzo in the race car with him. They get along great until Denny falls for Eve. Enzo see’s as there alone time is turning into a group, They eventually warm up to each other as She and Denny have a baby Zoe. Denny’s racing career gets in the way of family as Denny has to make tough choices. Enzo is the rock of the family supporting each member in what they need, as life brings hurdle after hurdle.

What I Liked: The character of Enzo is amazing, I love his insights and his misunderstandings of human culture are really funny. The racing aspect in the book is used really well as a theme throughout. The At of Racing in the Rain is a philosophy about trust and reacting to every sensation by trusting your instincts. The Enzo in the race car was such a great moment, made me feel as if I was there. Enzo getting revenge on the twins was priceless. The Mongolian dog afterlife theory was interesting and used well in the story. The humor was throughout the novel and really helped with the flow of this book. The fever dream of the stuffed Zebra reminded me of the Pick dancing element in Dumbo, and I love every minute of it.

What I Disliked: Enzo is a spoiler he keeps bringing up future things and ruining the surprise of the outcome, of two major events. The dialogue of the character Luca sounded so fake. Mike rarely pops up it was hard remembering where he fit in the story, when he does pop up mainly at the end.

Recommendations: This is a really special story that tugs on your heart strings in just the right way, I loved this story and recommend it. This story gave me the same feeling I had as I read Fredrik Backman’s A Man Called Ove combined with Mark Haddon’s The Curious Incident of the Dog at Night-Time. The tenderness and ups and downs of A Man Called Ove and the interesting narrator and the reveals in The Curious Incident of the Dog at Night-Time. The book did have a good amount of curse words so I would recommend it for adult or mature teenagers.  I rated this book 5 out of 5 stars it was one of the closest to a for but the charm and the feelings of it brought put it to that 5 level for me.

The Trailer to the Film, The Art Of Racing in the Rain 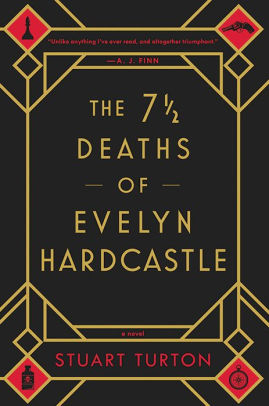 The 7 1/2 Deaths of Evelyn Hardcastle (or The 7 Deaths of Evelyn Hardcastle) by Stuart Turton is amazing an instant favorite for me. The book deserves a long slow clap for what it pulled off and accomplished. This book is an enigma wrapped in several riddles. The conclusion has four major twist that are all plausible and well thought out. The comparisons I’ve read about this book is Agatha Christie meets Groundhog Day, which is very fitting. The novel embodies Agatha Christie’s writing by making a grand murder, and having many compelling characters full of family secrets all with reasons to murder. I told a friend it’s a murder mystery where you get to play 8 of the characters, all at once. The 7 and a half Deaths of Evelyn Hardcastle is so fresh and new in its approach to and old fashioned murder mystery. It was unlike anything I’ve read before. Thanks for all the bloggers who made this book a can’t miss, and lead up to the hype of the novel.

The Plot: Aiden Bishop wakes up not quite feeling like himself, but it’s because he’s not himself he’s Sebastian Bell a doctor who’s alone in the wood with cuts on his arm. He says the only thing he can remember “Anna”. He feels like she’s in trouble he she’s a woman being chased by and man and heads in the direction of them. He doesn’t know what’s going on. The Man creeps up behind him and Bell cowers before him not daring to look up the man gives him a compass and a direction, which leads him to Blackheath an old mansion. Aiden soon learns there’s a murder taking place there and it’s his job to solve it using 8 host on the day of the murder. If he sleeps, loses conscience, or is murdered he goes into another host until all eight are used up. The day is repeated 8 days and he’s a different person every time. He can use versions of himself to help him, but everything still has to fall in order, also there are two others like Aiden also trying to solve the mystery, and who know who he really is, but can he trust either of them?

What I Liked: This novel makes sense, not at first but you’re just as confused as the character, but once everything is explained, everything fits, and its a beautiful thing. The writing is really good, this is my favorite line from it. “Anger’s solid; it has weight,. You can beat your fist against it, but pity’s a fog to become lost within.” This novel has a lot of character, but they all have they’re own voices, secrets, and agendas which made it easy to differentiate from one another. The twist are jaw dropping, and there’s more than a few. The way the story is told makes it very memorable and really unique as you go forward and sometimes backwards yet on the the same day. This novel nails the ending, actually I was satisfied after the first two major twists, and there’s a point that it could’ve ended, but it keeps going and offers two more major twist for ultimate satisfaction. There’s mysteries on mysteries, but the main mystery is very strong and kept my interest throughout.

What I Disliked: I still have questions? I feel satisfied with the ending but still have a couple of questions about the character’s and about time. I did not like that we did not get a time period for the party at Blackheath.

Recommendations: I whole heartily recommend The 7 1/2 Deaths of Evelyn Hardcaslte, this novel is destined to be a classic. The only people I could not see enjoying this are distracted readers, there’s a lot of information and if you can’t remember it then you could get easily lost. The confusing beginning only last 3o pages and them it all makes sense. This novel is for murder mystery lovers with a fresh way of telling the story. Lovers of the Black Mirror and the Twilight Zone will have fun with the trippier elements of the story. This is a rock solid debut for Stuart Turton, and I can not wait to see what this guy dreams up next. I rated this novel 5 out of 5 stars.